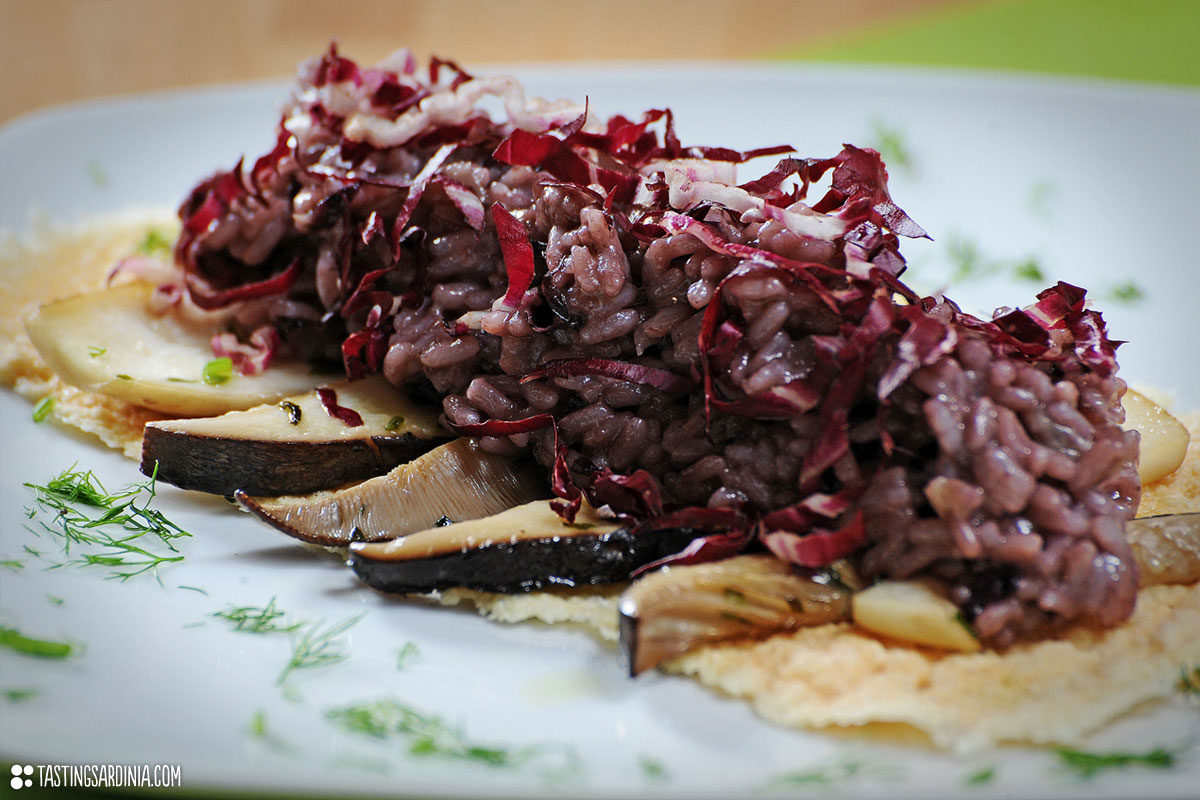 The risotto with cardoncelli mushrooms is a fall first course made with the king of mushrooms. The delicate cardoncello doesn’t turn brown even after cutting, and it retains its flavor even after cooking.
I made a blunder ones: I had just tried to melt down some pecorino cheese into a mould to get a nice shape to be used as a container for the rice but unfortunately it crumbled off. I should have used the grana padano for that purpose. To get a proper cheese basket you really need the right amount of fat in it. Nevertheless an idea came to my mind: keeping the cheese flat as a slab and using it as a base for something warm to make it melt a bit. Having some cardoncelli mushrooms at my disposal the line was taken, I had only to focus on the colours to make it work.

We will make the cheese slabs first, so that the rest of the preparation will be easy and smooth. Let’s cut with some scissors a sheet of greaseproof paper, 20 or 25 centimetres large should suit the occasion. Place two or three spoons of grated cheese on it according with the thickness of the slab you would like to get; you can use the spoon straight away to sprinkle all over or a small strainer instead, in order to obtain a more even layer. Put the greaseproof paper with the cheese in the microwave oven at the highest setting for 10 or 15 seconds and check the melting out to get the colour you would wish to rich. When the pecorino cheese is solid detach it from the paper and place it on a flat plate.

Clean the cardoncelli mushrooms by scrapping off the soil from the base of the stem, remove the caps and rub them gently with a damp clean cloth. After cleaning the mushrooms cut both the caps and the stems into slices and use part of the stems to make a vegetable broth; water, sliced stems and salt will be enough. In a stainless steel or non-stick pan heat the rest of the mushrooms with olive oil, two cloves of garlic a bit of parsley and fresh chilli pepper. After a short sauté add half a glass of vernaccia wine and wait for it to evaporate, then turn off the heat and put a lid on.

In another large pan with a thick bottom pour some olive oil, a crushed clove of garlic, some chopped onion and the coarsely shredded red-leafed chicory and sauté until soft without browning; add the rice too and let it toast for 5 minutes, then add half a glass of cannonau red wine and raise the burner to evaporate the alcohol. After that add a ladleful of stem broth every time the rice is drying too much and cook on a medium flame, stirring and adding more broth patently.

Five minutes before the rice finishes cooking add the gorgonzola cheese and keep staring. Once cooked turn off the heat, add the butter, stir it well and make it rest for some minutes. Now chop finely some chicory in strings. Time is ripe enough to garnish the dish.

We had previously placed the cheese slab on a flat plate. Warm up the mushrooms and arrange them on the cheese slab composing a nice layer. the warmth will trigger the melting of the cheese giving you the chance to cut it apart with the fork bringing away a balanced amount of cheese, mushrooms and rice. Put carefully the rice on top of the mushrooms making a ridge. Now put some raw chicory to garnish it all and give a pleasant freshness to the rice. Get it done sprinkling with the beard fennel. So nice.

My talented and beloved grandmother wouldn’t cook a dish like this.

Making the pecorino cheese slab on the microwave will give you the possibility to guess the right crispness and colour. Sprinkling it all with beard fennel will make it sparkling and rich in contrast, meanwhile, scooping it up with some rice it will be an interesting combinations of flavours. 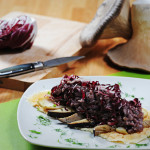 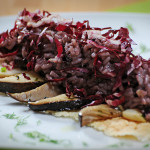 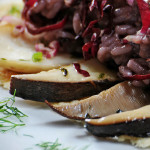 Cannonau or Garnacha is one of the most widely planted red wine grape varieties in the world. It ripens late, so it needs hot, dry conditions such as those found in Spain — where the grape probably originated — Sardinia, the south of France, and California. Here the grape benefits from its tolerance to heat and drought. Wines made from Cannonau tend to lack acid, tannin and color, and is usually blended with other varieties such as Syrah, Carignan, Tempranillo and Cinsaut, although the Sardinian D.O.C. wine Cannonau di Sardegna is by law 99% local Cannonau.
Vernaccia. Ampelographers have determined that the Vernaccia vine has many clonal varieties but is unrelated to some Italian vines known as “Vernaccia” such as the Sardinian varieties used in the Sherry-like wine Vernaccia di Oristano.